Turning an idea into a working piece of software takes a lot of work, and staying on the right track until the finish line is possible only when all team members know exactly what they are supposed to do and collaborate with one another. Having access to a capable tool for managing collaborative software development projects can be the difference between project success and project failure, and Microsoft TFS/Azure DevOps has emerged as a popular choice among software developers.

What is Microsoft TFS (Azure DevOps)?

It stands out from other similar offerings with its ability to be used as a backend to numerous integrated development environments (IDEs), but it works best when used with Microsoft Visual Studio or Eclipse. With Microsoft TFS, teams can create and manage work items, epics, stories, project tasks, and more to stay on the right track from start to finish.

Versions of Microsoft TFS released after September 2018 are called Azure DevOps Server and Azure DevOps Services. The former is available an on-premises solution that brings the power of Azure DevOps into dedicated environments. The latter is a cloud service running on the Microsoft cloud platform, Azure. It shares the same code with the on-premises version but doesn’t require any setup because users can simply log in with their Microsoft accounts and instantly set up an environment and create projects.

Microsoft TFS is a feature-packed work tracking, code sharing, and software shipping solution that offers a large collection of tools designed to make collaborative software development easier and more efficient. It supports a broad range of programming languages, including C#, Python, and Java, allowing developers to express themselves in the languages they feel most confident using.

Microsoft TFS integrates with Git, making it possible to clone a repository, add code, and create branches without the need for any third-party tool. Cross-team collaboration and code-sharing can be maximized by finding code across all projects and using filters, preview code, view history, and other source code management enhancing features. Users can set branch policies to require code reviews or automatically add reviewers, and use pull requests to review and merge branch code to a master branch.

Because Microsoft TFS integrates with Excel, Project, and PowerPoint, clients can illustrate their requirements with familiar tools and permissions can be granted to individual users based on existing requirements. Thanks to configurable widgets, requirements can be easily tracked right from the dashboard.

Microsoft TFS supports both agile and waterfall project management, featuring customizable workflows that consist of a set of states, the valid transitions between the states, and the reasons for transitioning the work item to the selected state. Project managers can create and organize backlogs, estimate work to be completed in future sprints using the forecast tool, visualize ideas on a storyboard, and generally plan work the way that suits them the most.

Microsoft TFS makes it possible to track the quality of software under development with comprehensive reports by using the out-of-the-box reports in SQL Server Reporting Services that aggregate metrics from work items, version control, test results, and builds. Insight into how much work the team is tackling within a sprint or release is provided by Project management reports, whose creation and access can be controlled on a per-user basis.

Automated builds support building, testing, and releasing software with greater speed and frequency, and they can be enhanced with scripts to add business logic to the build process. Retention policies automatically delete old completed builds to minimize clutter, and granular build permissions determine who can define, delete, and manage builds.

Introduced in Microsoft TFS 2010, Lab Management allows developers to deploy and test their applications on virtual machines. Over the years Lab Management has been enhanced with Azure integration, service endpoint extensibility, and other features that make it an integral part of Build and Release Management.

Microsoft TFS helps developers reduce time to market by introducing greater agility into the release process. Applications can be deployed across platforms to all environments of the pipeline with just one selection, and full audit history of all activities performed on a release with detailed release logs and approval tracking ensures flawless traceability.

The Need for a Dedicated RM Tool

While Microsoft TFS provides the tools needed to manage requirements, the interface and client-side functionality isn’t there. The good news is that the requirements management gap can be effortlessly bridged with a dedicated RM tool, such as Visure Requirements.

The Visure platform lets you use the methods and tools you’re already familiar with, allowing you to work the way you want and not the way your vendor imposes on you. Linking requirements to development tasks while accommodating different teams and cultures.

Visure Requirements bridges the requirements gap of Microsoft TFS, providing integral support to the complete requirement process and allowing users to keep using their own tools while keeping everything centralized. 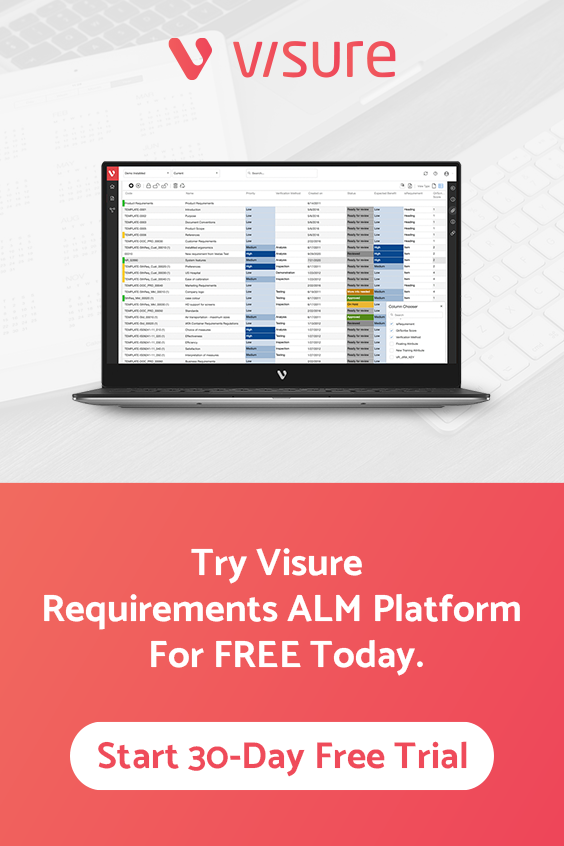